Vajra Hotel Still Standing on the Roof of the World 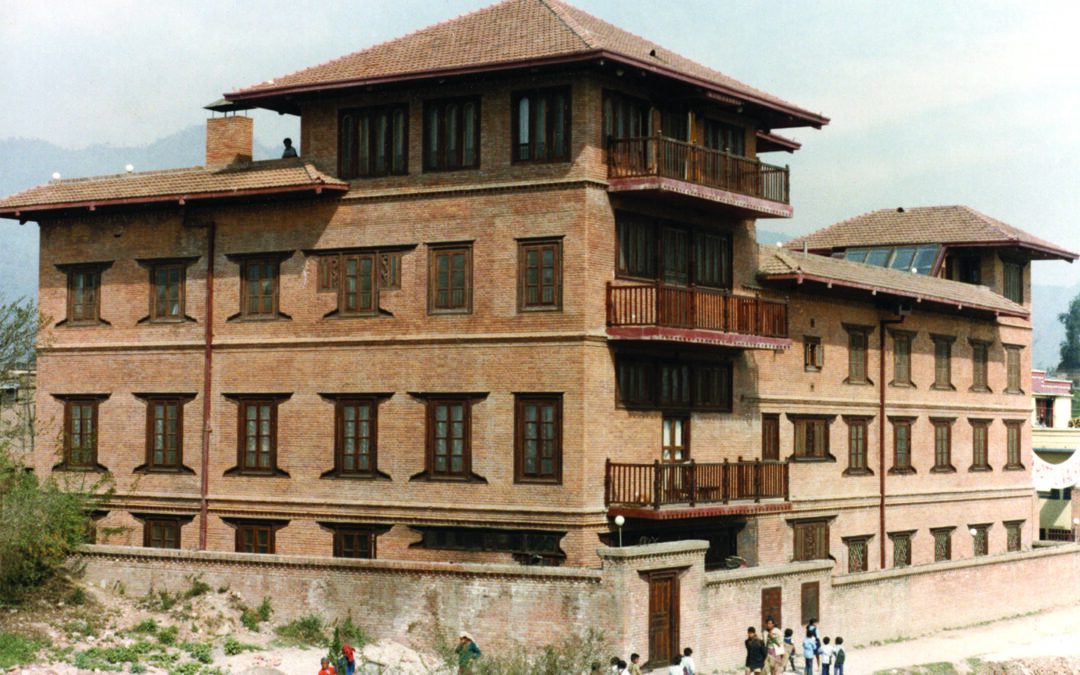 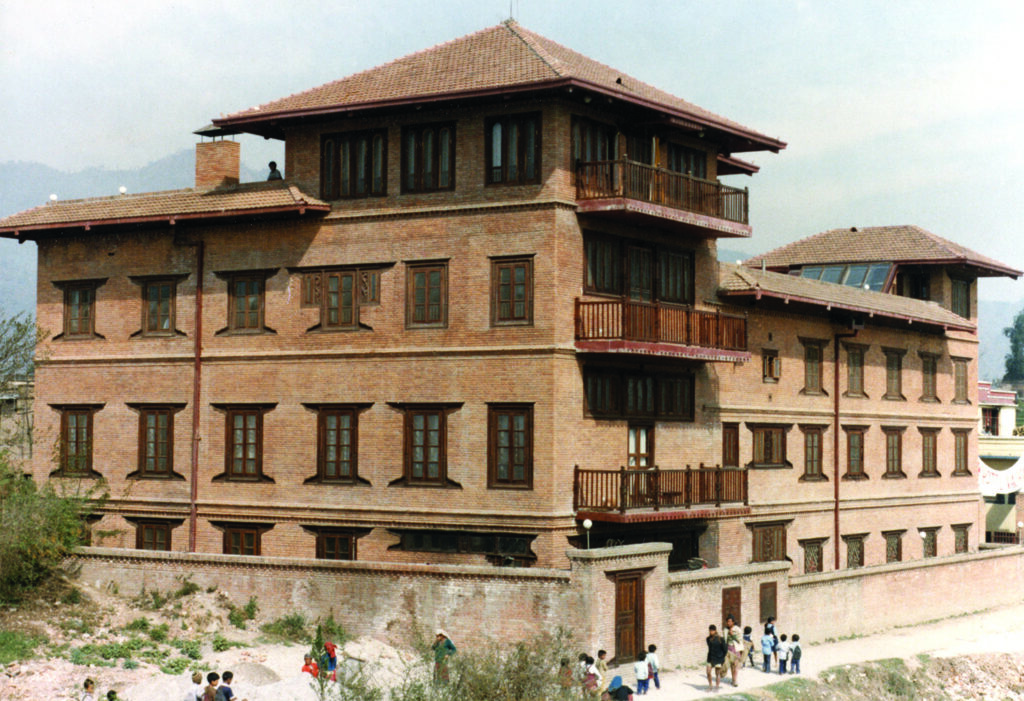 On April 25th, 2015 Nepal was struck by the most powerful quake the country has experienced in 80 years, 7.8 magnitude. The epicenter was just 50 miles west of Kathmandu, and devastated much of the city with death tolls in the thousands and many still missing.

We send our hearts and prayers to the people of Kathmandu Valley, and our friends who run the Vajra Hotel and Project Tibet. Located on the slopes of the Swayambhu Temple in Kathmandu, The Vajra Hotel was one of the Institute of Ecotechnics’ early projects. The hotel, built in 1981 was designed by ecological/cultural entrepreneur, John Allen, working with Margaret Augustine, project design manager, and chief architect Phil Hawes, who synergized the traditions of Nepal’s great architects with modern earthquake resistant techniques. 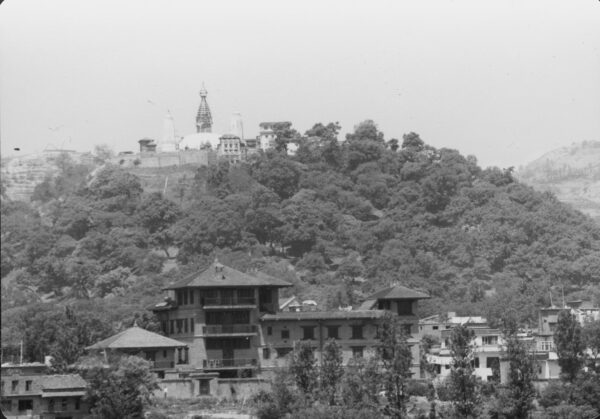 Swayhambunath above Vajra Hotel, circa 1980.

We have learned that the Vajra Hotel is still standing. Although books flew off the shelves in the library, and art fell from the walls, the main structures of the buildings are in good shape, including the newer wing which was built circa 1990.

Many of the surrounding buildings have fallen or been badly damaged. There are 300 to 400 people who are reported to be taking shelter in the garden and are being provided with food and water as much as possible, and one pregnant woman has been given a room. There is a generator, making electricity available, but internet access is extremely limited.

As we pause to take in the full impact of what has shaken the roof of the world, we reflect on some of the words of the man with the original vision to build Vajra Hotel as a cultural hub in Kathmandu, John Allen, from his memoir, Me and the Biospheres:

Vajra Hotel’s opening in 1978 realized one of my fundamental objectives in life of bringing together in one place representatives of East and West, culturally, and North and South, politically. This synergy of the Vajra Hotel and the ongoing expeditions of the Heraclitus gave the Institute of Ecotechnics and its friends and associates remarkable portals into ethnosphere and biosphere. Explorers, anthropologists, ecologists, dancers, the World Wildlife Fund, and other creative individuals and development groups used Vajra Hotel’s premises for encounters, conversations, meetings and performances. Rinpoches, swamis, depth psychologists, top Asian art experts, Baul singers, European yogis and philosophical teachers reserved its great rooftop pagoda, with its ceiling paintings by Rinchen Norbu and his school of traditional Tibetan muralists. . . 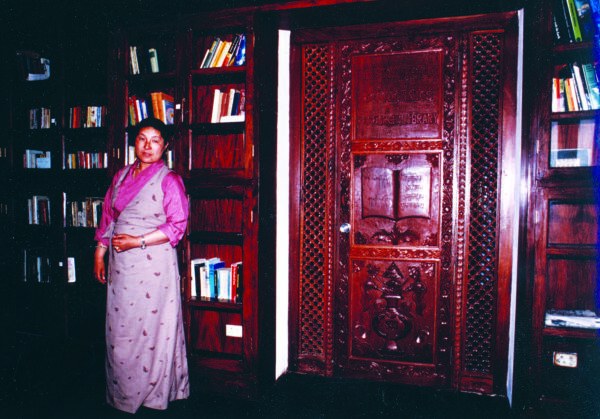 The Ecotechnics Library at the Vajra Hotel, Kathamandu.

Connoisseurs of travel considered the Vajra Hotel an architectural gem and ‘in’ place. . . . The Vajra quickly became a sought after destination by travelers to Kathmandu. Many locals, artists, intelligentsia, and business people came for conversations in its dining hall, or climbed up to the rooftop where you could see into Durbar Square, the heart of medieval Kathmandu. Scholars from the West and East sought out our Institute of Ecotechnics library for which I handpicked over a thousand volumes. Its shelves contained the Tibetan canon, approved by the Dalai Lama, and the Hindu canon, approved by my friend, Swami Dharmjyoti, the head of the Nagarjung Order, who became our librarian. I selected an approximation to a Western canon, in literature, anthropology, history, management, and philosophy.

From the Vajra Hotel, you can walk straight up to Swayambhunath (the Self-Realized) Hindu-Buddhist temple complex, rising on a twenty-thousand-year-old artificial platform topping a small mountain. It had been a center of the Naga cosmogony and religion that still exists in Nepal. You’re supposed to count the steps as you go up and down, and you have to do it all over again if you lost count. Exoterically, vajra (dorje in Tibetan) means lightning bolt, but esoterically it means an ‘indestructible diamond point’ of attention where a human can realize dharmakaya (the reality or cosmic decision body). I used to go up to Swayambhu every week while the Vajra Hotel was under construction and sit in silence with Sechu Rinpoche, while, telepathically united, we gazed at the Vajra and Durbar Square. 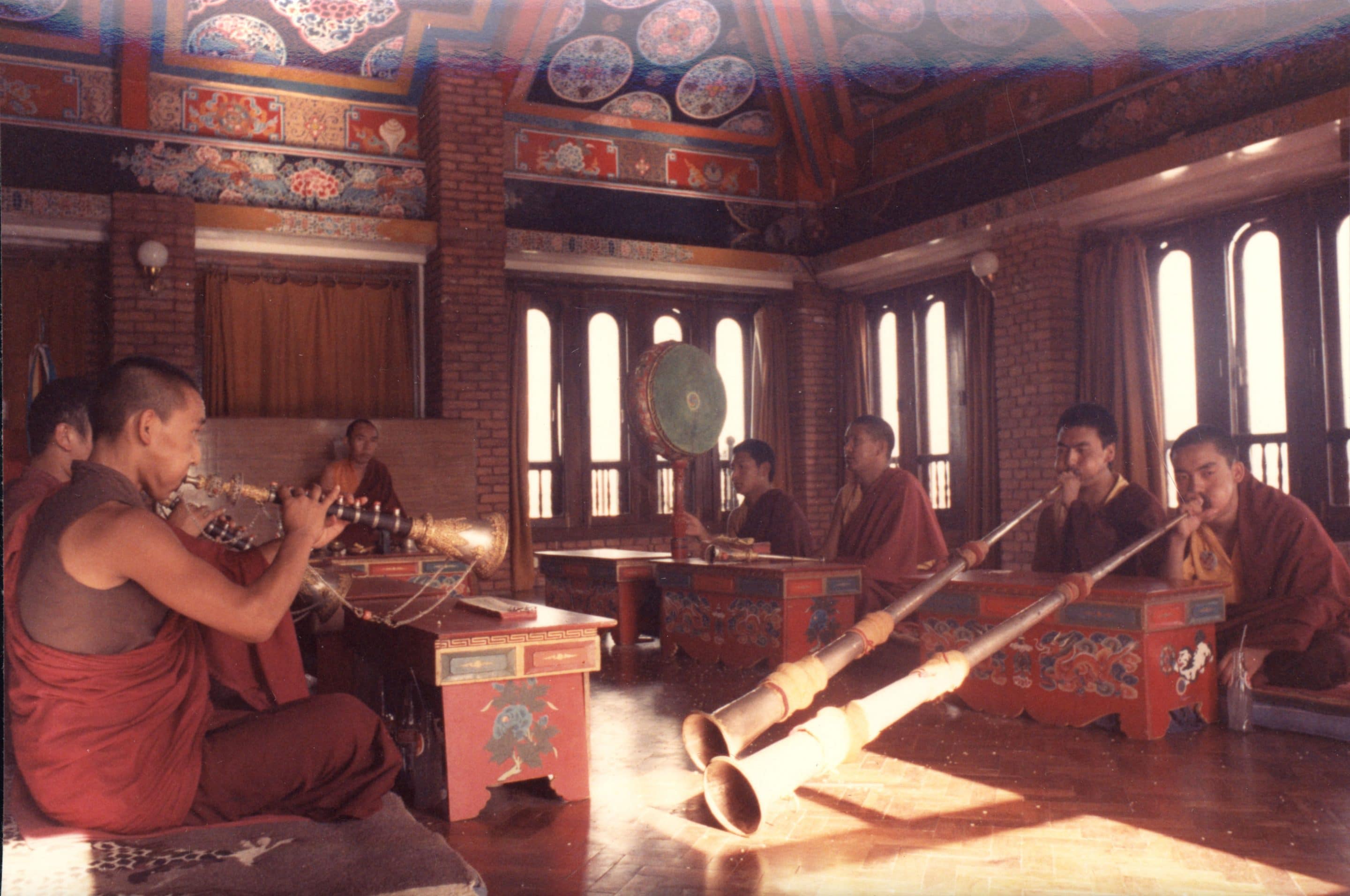 Tibetan monks from the Sakya lineage lead a puja in the Pagoda at Vajra Hotel (circa 1981).

While we are happy that the structural integrity of Vajra has allowed this cultural center to continue into the future, many of the surrounding buildings and their inhabitants were far less fortunate. In keeping with the notion of the ‘diamond point,’ which is an unbreakable foundation that becomes the opportunity for metamorphoses and transcendence, let’s get help to where it is needed the most. Aid can be given through various agencies. One in the immediate area is The International Federation of Red Cross and Red Crescent Societies (IFRC), which is prepping resources from its hubs in New Delhi, Kuala Lumpur and Bangkok. The federation is releasing funds from its Disaster Response Emergency Fund to support vital services including food, shelter, water and sanitation.

On behalf of all of us, godspeed to all at the Vajra Hotel and the Kathmandu Valley as they rebuild their lives on the roof of the world.