Acclimating to the Anthropocene 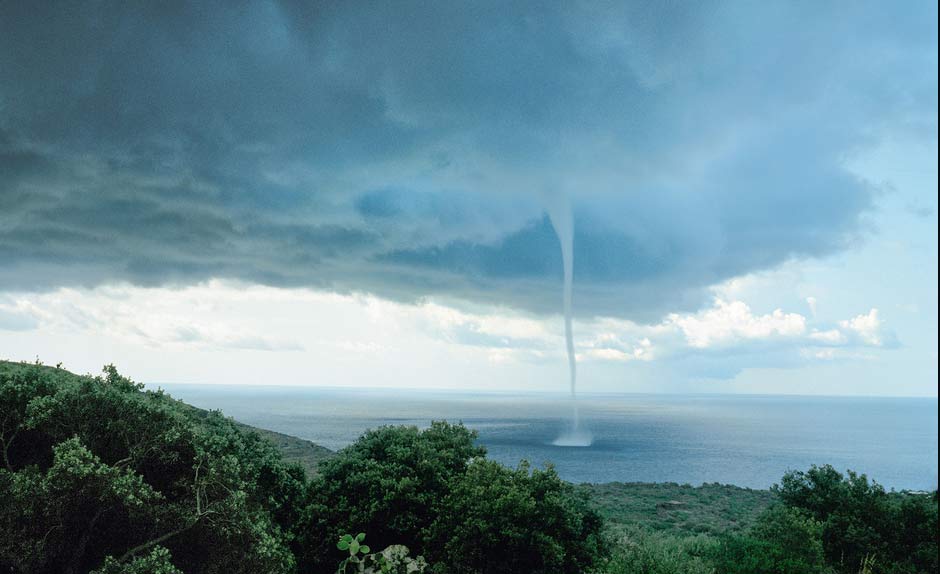 NEWS FLASH: UPDATING THIS POST TO AUGUST 30, 2016 — The Geological Commission has the following update published today saying a majority are convinced there is enough evidence to support recognizing us to be in a new geological epoch, the anthropocene, where humanity has become the most dominant geological force on the planet.

Here’s their update from the BBC:

“That doesn’t mean it will be formalised, but we’re going to go through the procedure of putting in a submission.”

They estimate 2 to 3 years for the application process to be completed.

Here are two excellent talks on the topic. Author, journalist and Anthropocene expert, Christian Schwagerl with champion for the environment, Tony Juniper, President of the Wildlife Trusts in UK. 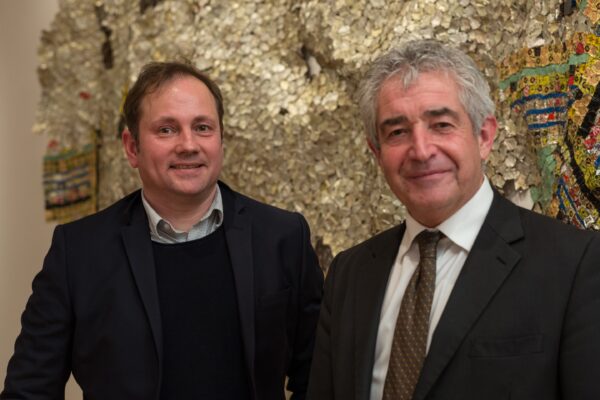 “The conditions that will come with the Anthropocene are not simply a technical and scientific subject, they’re also highly political, philosophical and about the relationship that we wish to foster with the earth into the future.” -Tony Juniper at the Royal Society of Arts. Here’s a podcast of their joint talk.

Christian Schwägerl, author of The Anthropocene: The Human Era and How It Shapes Our Planet and co-founder of The Anthropocene Project, visited the RSA (Royal Society of Arts) in London to have a conversation with Tony Juniper, sustainability adviser and author of What Has Nature Ever Done for Us? How Money Really Does Grow on Trees, about how we can approach the Anthropocene optimistically. While in London, Christian also visited the Royal Institution to share some of his innovative ideas about how we can take responsibility in our role as the dominant force on the planet with Robin McKie, science and technology editor for The Observer, and Jan Zalasiewicz, Professor of Palaeobiology at the University of Leicester.

“We’re here to discuss and to listen about the point in time in which homo sapiens. . . are now influencing the geology of our world and the societal impact of that.” -Robin McKie at the Royal Institution 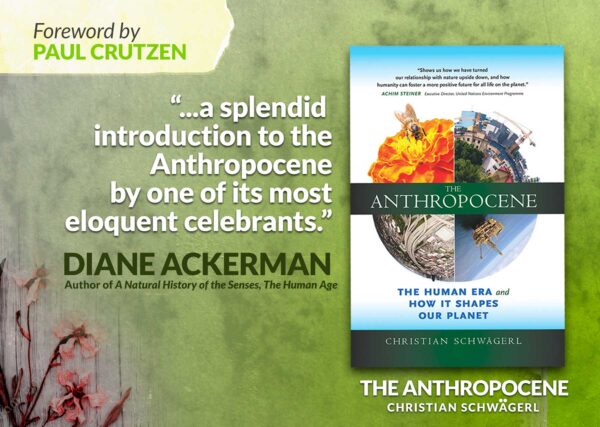 To read more on this radical investigation of our global situation, pick up your own copy of The Anthropocene: The Human Era and How It Shapes Our Planet in our bookstore.

Christian Schwägerl, author of The Anthropocene: The Human Era and How It Shapes Our Planet and co-founder of The Anthropocene Project, visited the RSA (Royal Society of Arts) in London to have a conversation with Tony Juniper, sustainability adviser and author of What Has Nature Ever Done for Us? How Money Really Does Grow on Trees, about how we can approach the Anthropocene optimistically. While in London, Christian also visited the Royal Institution to share some of his innovative ideas about how we can take responsibility in our role as the dominant force on the planet with Robin McKie, science and technology editor for The Observer, and Jan Zalasiewicz, Professor of Palaeobiology at the University of Leicester.

The Anthropocene idea originated with Nobel Prize-winning atmospheric chemist Paul Crutzen, who realized the impact that human activities were having on the atmosphere. The research that Crutzen conducted revealed how certain chemicals were depleting the Ozone layer. This information incited activists to fight for bans in the 1980s on chemicals that were being used in refrigerants and aerosol cans. It’s been encouraging to see that in the years since these changes were made, Ozone levels have been steadily increasing.

The significance of this finding led Crutzen to wonder about other ways that humans might be impacting the environment. As the list of his findings kept growing longer, Crutzen was led to the revolutionary idea that the influence of humanity on earth has reached a point that warrants its own geologic epoch: the “Anthropocene.”

Christian provides twelve key ideas as we move toward a more responsible and conscious Anthropocene:

To get a sense of our place in the Anthropocene, we need to redefine our sense of time.

We find ourselves caught in an instantaneous flow of information, keeping us thinking in the short-term. Compared with the doomsdayism so typically associated with thinking of the environmental movement which doesn’t encourage much consideration for what the distant future will look like. By expanding our sense of time to include the long now, we can give our actions a deeper context.

When you get into a car today, you’re touching the deep past. The gasoline powering the vehicles we drive so casually was formed three hundred million years ago. At the same time, we’re also touching the deep future; fifty thousand years from now, carbon molecules released from your roadtrip will still be influencing the atmosphere.

We have to include human civilization in our understanding of nature. Cities must learn to function as planetary ecosystems. That means more sustainable transportation systems, renewable energy sources, and locally grown sources of food.

Humans are involved in the cyclical system of the biosphere where everything comes back around. There’s nowhere that resources can be extracted from without an impact; there’s nowhere to dump waste materials where they’ll disappear.

The business of growing food and raising animals for human consumption now takes place on an area of land larger than the size of South America. We have to take measures to counteract the destruction of soils caused by pesticides and chemical fertilizers, reverse deforestation, and consider the influence that our personal dietary choices have on global.

Technology that is compostable must become the new standard. The iPhone has elements from forty different mountains. When we consider the resources that we’re pulling as a society from the earth for our technology, we can start to respect the process. The biosphere has a recycling process built in, and the technosphere has to become integrated within it.

When we consider the material level that people strive for around the world, and then multiply that by that number of humans currently on the planet it shows us that instead of fighting for resources, we need to be sharing them.

We need to be using the energy we have more wisely. We need to be encouraging meaningful strides in innovation by investing in energy research.

Humanity has been breeding animals and cultivating plants for over ten thousand years. More recently, innovations in biological technology provide humans with even greater level of power over evolutionary outcomes. Will the use of this power reflect an attitude of stewardship or of short-term capitalist interests?

Though the name ‘Anthropocene’ reflects on our species, it can serve to open us up to a greater sense of all of the other life forms we share this planet with. By putting human history into a context of natural history, it can increase our sense of connection with the planetary story.

The Anthropocene combines the spheres of economy and ecology. By putting economics into an ecological framework, we can adjust our perspective so that natural resources are not viewed as externalities, but as our true source of wealth.

In the Anthropocene we can connect our daily choices with their global impact and reflect on the influence that those choices have. We can ask ourselves what we offer back to the earth every day. In this way we can consider what we give as a daily offering to the planet—is it the contents of our garbage can?

This idea can help focus us and motivate us by contextualizing the role each person has as an individual in this epoch.

We already have an internet that connects us with so many things in the world, from highly discounted products shipped right to our doorstep to an endless stream of cat pictures, but by creating an internet of all things we can brings in the interests of all life forms on earth. Perhaps such an internet could help us calculate the best actions to take now according to the interests of future generations.

We generally think of ourselves as a materialistic culture, but are we really if we buy things to throw them away after one use? Companies build products with planned obsolescence, so that they stop working in just a few years and we buy new things. We have to provide incentives to make lasting, quality products rather than focusing on maximizing profits. 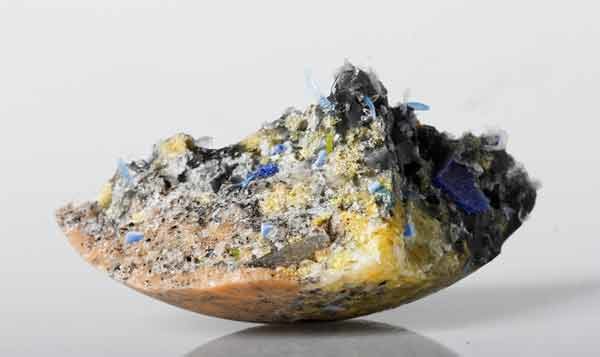 An artistic representation of a future plastic-laden fossil. From Craft in the Anthropocene, by Yesenia Thibault-Picazo

Every choice, every action has an influence on the rest of life on earth. The globalization of our society has such a far reach that the contents of our refrigerators span continents, oftentimes without our even realizing their exotic origins. The Anthropocene reflects a change in our consciousness as we realize our role as the dominant force on the planet. As we come to appreciate this power, we must consider how to be democratic in considering the interests of future generations as well as those who are most vulnerable to climate change but may not have as strong of a voice in the plutocratic political structures that are currently in place.

As we face the possibilities of this new epoch, we should remain optimistic. The Anthropocene is an open idea. It’s an idea that presents us with a wide range of challenges at the same time that it imbues us with the agency to shift the course of life on earth. As we begin to acknowledge the reality of our role as planetary stewards, we can start by bringing mindfulness to the choices that shape our lives and intention to the actions that will shape our world.

To read more on this radical investigation of our global situation, pick up your own copy of The Anthropocene: The Human Era and How It Shapes Our Planet in our bookstore.