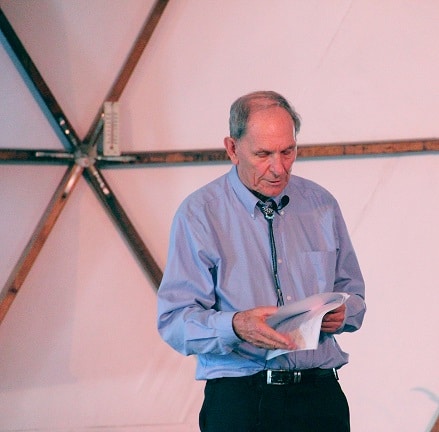 This video is an excerpt from The New Bioeconomics Colloquium that took place in Santa Fe, NM on July 23rd, 2013.[hr]

Harmony of the Biosphere, Ethnosphere, and Noosphere is needed to transform the Technosphere’s continuous destructions into continuous creations. These “spheres,” actually complex dynamically changing shapes, can be visualized as experiential layers around Planet Earth. Physical measurements, of course, show Earth to be an oblate spheroid surface roughened with ocean deeps, continental plates, ice caps, volcanic eruptions and lava flows.

Earth’ s oceans respond to Moon with tides, its atmosphere to expansions and contractions caused by Sun, to weather such as Ice Ages and Dry Ages, to meteor impacts, and re-arranging of continents from movement of plates. Billions of tons a year are moved by mining, building gigantic concrete and steel cities level whole mountains, create great lakes with dams, artificial rivers with canals, deserts (from soil blown away), and bush and gullies from destroyed forests and plowed soil.

Noosphere received its name from Vernadsky, Russian geochemist who first used Biosphere to name the total system of life on Earth.

Nous, Greek for Thought-Intelligence, became Noosphere, when the collective human intelligence began operating beyond Ethnosphere’s cultural totems and taboos and Technosphere’s Panama and Suez Canals, Planetary Air transport, Space ships, Radio, Television, World Market, and The Net. Technospherics dynamics, beyond the will of humans as Marx first saw, now exploit Ethnosphere’s conflicting totems and taboos; its corporate owners and military guardians intensively shove their shit and shinola throughout Biosphere, drastically load Lithosphere, Atmosphere, and Hydrosphere with millions of new chemicals and trillions of tons displacement of rock, oil, and minerals.

Noospherians endeavor to integrate Earth’s histories, sciences, arts, politics, enterprises, and adventures in their individual lives and in creative groups, to understand realities, to synergize with each other to increase Nous, their intelligence.

Biosphere signifies the total four billion year old system of Earth life, from first non-nucleated cells to today’s six kingdoms, counting humans as one. Some see a seventh kingdom emerging from industrial-information revolution: humans spliced to a technologic cocoon from conception to separation.

Technosphere: all Technics from Space Travel to Farming to Medicine to Language to Government, War, and Markets….  Technology’s drives are  analogues to Life’s: Expansion at all costs, Complexity, and Ability to survive situations from solitary walks to Class and National Wars; from Avant Garde Arts to street markets to World Trade; from Militaries backed with hydrogen bombs, special forces and brain washings, to individuals and tribes defending homelands with jungle craft and transformations of perceptions.

But daydreams differ from nightmares. We can critique, test, improve daydreams.  Inspiring dreams can, if coherent with data, transform to creative visions to birth ideas which at right time and place, with right ideas, right skills, and right people, transform drastically impoverished situations into health and wealth.

Which, for examples, those vectors did by transforming Fascist, Imperialistic, War worshipping, Western Europe to a bastion of peace in l945-48, in Rebirthing Classical Cosmic Thought in Firenze in one generation in the l400’s, and in Saving the Redwoods, Yellowstone Hot Springs, and other Wildernesses from commercial devastation in USA.

Harmony easily arises between biospheric aligned bodies, but not between bodies specialized to serve class, corporate, or national interests hostile to wilderness and spontaneity. This harmony, embodied here and here on occasion by two or three who understand realities, can, with intelligent action, spread to groups; on occasion, to communities.

But here in a dome co-designed with Bucky Fuller and Bill Dempster, I vibe with bodies adaptable to many conditions: desert, jungle, ocean, world city, farming, high tech; to many cultures, philosophies and world views;  I glimpse in each one here, flowers of a planetary, hard core, experienced, life enhancing, emerging culture.

I see also a working sample of creative Biospheric-ethnospheric-technospheric-noospheric subsystems:  a sparkling glint in the eye of Reality.

On this Ranch, one can see drastic soil erosion, begun by l880’s ruthless mining and ranching, halted, but not yet restored, by hand carried tons of rocks to make strategic small dams, by giving up cattle and horses, re-building soil, growing orchard and gardens.

I don’t give up Hope in the Future; wish I could have more Faith in the Present, more Charity toward the Past. I happily see here, embodied in different ratios by each of us, allegiance to those Values, which we need to challenge this disastrous era.

I belong to that School that never prays except by actions, but here I must use words.

I pray that humanity, at least its tested cadres and uncorrupted newcomers, work side by side with all Fellow Life Forms to Harmonize Bodies and Technics.  That they stop bowing to super profits looted from humans and biosphere by oily crusades, bulldozed wildernesses, and body degenerating foods.