Ira Cohen, editor, filmmaker, photographer, and poet, was born in 1935.

He is the founder of numerous ground-breaking movements and reviews such as the Akashic Record, the Starstreams Poetry Series (Kathmandu), and the Universal Mutant Repertory Company (when he became known as “The Father of Mylar Photography”): he has also worked as contributing editor of publications such as Ins and Outs (Amsterdam), Ignite (New York), the NY Black Book, and Nexus (Dayton, Ohio). Selected volumes of his poetry have been published in Holland (The Stauffenberg Cycle and Other Poems), in Oracle, Arizona (On Feet of Gold, Synergetic Press) and England (Media Shamans Ratio 3 with Gerard Malanga and Angus MacLise), as well as countless audio and CD recordings of performances with diverse artistic collaborators including Paul Bowles, Brion Gysin, William Burroughs and Jack Smith. His photographs have been used on various record covers by artists including Jimi Hendrix, John McLaughlin, Pharoah Sanders and other covers for Bill Laswell at Axiom Records.

In the realm of visual art, his portrait photography depicts subjects from North Africa to India and the Himalayas to Ethiopia. His work has been exhibited extensively at various institutions including ART (New York), the October Gallery (London), the Gallery of Photography (Dublin), and the TB Institute (Tokyo). Photographs have been published in The London Sunday Times, Avant Garde, LIFE magazine, Facade (Paris), to cite only a few. 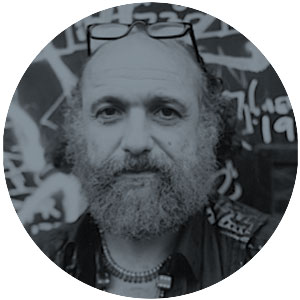